Window on a Closed World: New portal site makes Fontilles accessible to researchers as never before. 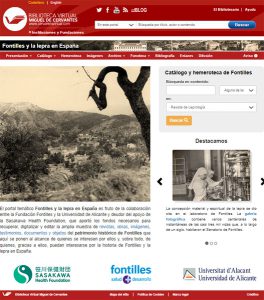 In 1909, eight persons affected by leprosy living in desperate circumstances were taken to a newly built hospital in the wooded hills above Valencia on the east coast of Spain. This was the beginning of the Sanatorium Francisco de Borja, the initiative of a local lawyer and a Jesuit priest to care for those with the disease.

In the more than 100 years since its founding, the sanatorium commonly known as Fontilles has dedicated itself to both the medical and social needs of persons affected by leprosy. In the process, it has become a repository of history—a history that is now accessible as never before thanks to a new online portal.

“Fontilles and Leprosy in Spain” is a collaboration between the Fontilles Foundation and the University of Alicante, with funding provided by Sasakawa Health Foundation to organize, classify, store, and digitize materials. These include medical files, photos, letters, maps, research reports, as well as a large number of book and journals.

Over the years, Fontilles has been home to over 2,600 persons affected by leprosy. Separated from the outside world by a wall, they formed a community with its own rich heritage and institutions—a church, a theatre, a bar, hairdresser, bakery and more.

Fontilles also became a center for research with its own laboratory and Spanish-language scientific journal. Today less than two dozen longterm residents remain, but Fontilles continues to discharge its duty of care to them while serving as a referral and training center for leprosy.

“The buildings, the wall, the fields and the landscape of the Fontilles valley are a physical testimony of these lives, of the personal and collective histories that they defined and, also, of a still unknown part of the social, political, medical and cultural history of Spain, as are thousands of documents, books and magazines, photographs and posters,” the University of Alicante’s Antonio Garcia Belmar writes. “The portal ‘Fontilles and Leprosy in Spain’ aims to be an open window to that closed world.”

Visit the portal at the Miguel de Cervantes Virtual Library of the University of Alicante:
https://www.cervantesvirtual.com/portales/fontilles_y_la_lepra_en_espana/