People who suffer from leprosy feel the full weight of history on their shoulders when they receive their diagnosis. They perceive leprosy to be a stigmatised disease and can often internalise that stigma. Hurtful terms used to describe them and their illness add to the difficulties that they experience in coming to terms with their illness.

In 1948 at the Fifth International Leprosy Congress held in Havana, the attendees passed a resolution that “the name of the term ‘leper’ in designation of the patient with leprosy be abandoned”. Instead a person suffering from the disease should be designated as a “leprosy patient”. They added that they discouraged using any term with unpleasant associations that labelled people with leprosy. 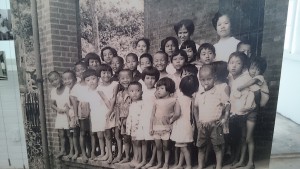 They wanted to retain the label “leprosy” for the scientific designation of the disease. They also left open the possibility of any local popular term that could be substituted for leprosy if that helped people “understand more fully and clearly the advances that have been made in the understanding, diagnosis and treatment of the disease”. Nonetheless, they cautioned that “it would be unwise to adopt such terms to conceal the true nature of the disease.” International Journal of Leprosy 16.2 (1948): 243-4

The editorial policy of the Carville Star also opposes the use of “leprosy”, instead preferring “Hansen’s disease”. They write “We dislike the word “leprosy” intensely, but we dislike the practice of censorship even more.”

As historians writing about the disease in the context of past attitudes towards the disease, we are careful not to reinvigorate those older and less sensitive designations. We actively try to avoid the use of the term “leper”. We still use the term “leprosy” because as those who deal with the disease in a medical and professional context find that using any other term necessitates having to explain that it is leprosy.

In Australia, Japan, the US, and Brazil, “Hansen’s Disease” is used more frequently than “leprosy”.