When Leprosy Colonies Are Abandoned

The once isolated sites for leprosy colonies are now in many instances valuable real estate. It often happens too that a few people are still left in these places. Under the policies of the past, people were removed to places of isolation with hardly any time to say good bye to their loved ones. Over time, they became accustomed to their new homes and grew old in these places. When isolation was no longer compulsory, many had nowhere else to go. The final irony for these elderly people is the encroachment of the modern world with its demands for relocation. Elderly people in Carville, Taiwan, and Singapore have all faced this dilemma. Loh Kah Seng has written about this in Singapore:

He describes the difficulties of the transitions that this relocation requires of the elderly:

“Explaining the reasons behind the move, the authorities said at the time that the old home was run down and the site was needed for a new school. Consequently, the relocation to a brand-new building with modern toilets and elevators in an accessible area was billed as progress. But for the ageing residents, whose interests were yet again sacrificed in the name of moving forward, it represented one more act of dislocation in their lives.

In the past, many had lived in Trafalgar Home – formerly the Singapore Leper Asylum – where they had jobs as cooks and cleaners, nursing aides and clerks. When Trafalgar closed in 1993, they were moved to Silra Home, minus their jobs in most cases. Then, last year, came the move to the new Silra Home in Buangkok Green.

The shift to Buangkok Green is probably the final journey for the 60-odd residents, who are in their 60s to 90s, and about half of whom are wheelchair-bound.

Some welcomed the move. A TV program from 2005 shows them applauding the new premises for being cleaner and free of mosquitoes. The dilapidated buildings at the old Silra Home (constructed in 1971) were a fire hazard. One resident remarked happily that they no longer risked being struck by falling ceiling beams that had been eaten through by termites.

But for others, despite the better, modern living conditions, relocation has brought a fresh set of problems. In building the new facilities, the planners overlooked the basic needs of leprosy-affected persons. There is only one cubicle per toilet with wheelchair access and only three toilets in all for more than 20 male residents on the second level. The cubicle door handles, which conform to building standards, are too short to be gripped by those with hand disabilities. Residents must negotiate a ramp to access the wheelchair toilet. Wheeling up the ramp, residents have slipped and fallen on their heads.

In the old Silra Home, they lived three or four to a room. Now they sleep on hospital beds, more than 20 to a ward. They have had to exchange their own clothes for hospital uniforms, even though, as some protested, they are not ill. Meanwhile, they have been joined by other, non-leprosy affected persons, admitted with skin diseases.” 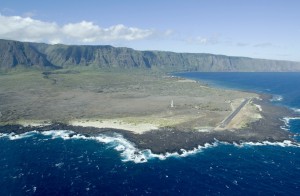 There are sixteen people between the ages of seventy-three and ninety-two who remain at Kalaupapa, in Hawaii. Debates circulate about what is to become of Kalaupapa when these people pass away. One option is for it to become an ecotourism destination. For those who were forcibly detained there, or whose parents or grandparents were sent there, there is a sense of ownership and fierce defensiveness. For them, it is a “sacred” place. (“When the Last Patient Dies” Atlantic May 2015 http://www.theatlantic.com/health/archive/2015/05/when-the-last-patient-dies/394163/)

One of the residents has made a particularly telling remark about this proposal:

“We are—and you are not,” Clarence “Boogie” Kahilihiwa, one of the last-remaining Kalaupapa patients, explained to The Times back in 2008. “Every time one person dies, we get less and less.” And even though Kahilihiwa supports the proposed change—at least the idea of allowing children to visit—tourism isn’t on his mind: “Come when we alive,” he told The Associated Press earlier this month, speaking in Hawaiian Pidgin. “No come when we all dead.”

The lives that have been lived at Kalaupapa must always be respected and commemorated. As the article concludes:

“With the patient population getting smaller, there has been a tendency lately to refer to a time in the near future at Kalaupapa when there are no more patients,” the Kalaupapa advocacy organization, Ka Ohana O Kaluapapa, told the National Park Service in 2009. “The Ohana does not believe such a time will ever come to be. While the patient population may no longer be with us physically, they will always be present spiritually. They will always be part of this land.”