The slave records for Colombia from the mid-eighteenth century describe instances of leprosy. There were “many cases of masters who had to sell their slaves at reduced rates because of the presence of lesions produced by leprosy.” (Landers et al 268) Landers et al write, “Hundreds of similar records contain information about the different diseases suffered by communities of free and enslaved blacks, with most of the cases pertaining to leprosy and/or syphilis.” (268) 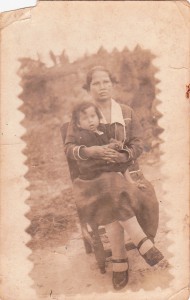 There were three lazarettos in Colombia in the nineteenth century. These were Agua de Dios, Contratación, and Caño de Loro. These were like townships where people with leprosy and their families lived.

But by the beginning of the twentieth century, leprosy shifted from being a subject fit for charitable activity to being considered as an obstacle to economic progress. This concern was enflamed by reports that there were between thirty-thousand and fifty-thousand infected people in the country. So “leprosy became a national embarrassment to this progressive-minded nation. The government and the medical community found the exaggerated late-nineteenth-century data on leprosy a danger for their civilizing project …” (Obregón 2003, p. 130) These anxieties gave the government the moral authority to enact harsh new laws forcing people with leprosy to be segregated: “Extinguishing leprosy became tantamount to building a new, modern Colombian society, and physicians looked abroad for models to control the spread of the disease.” (p. 131) 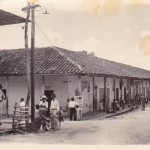 The main street of Agua de Dios in the 1960s 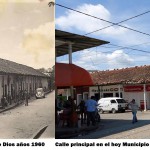 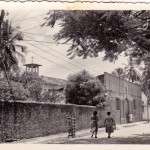 This building was known as Asilo Las Mercedes in the 1800s, and was later rebuilt as Agua de Dios’s main hospital. It has now been designated a National Heritage building. 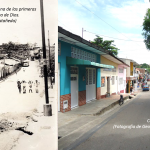 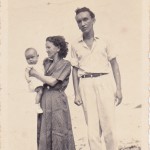 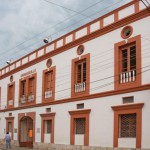 The Juan de Dios Carrasquilla building, a National Heritage site. It was built as a hospital in 1918, and now houses the Museo Medical de la Lepra and Agua de Dios’s administrative offices. 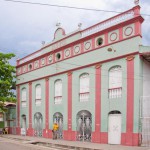 The Salon Teatro Vargas Tejada (Vargas Tejada Theatre), built in 1924 as recreation for the residents of Agua de Dios. It remains standing and is a National Heritage building. 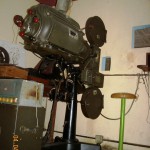 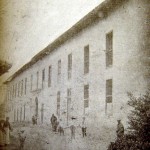 Older photograph of the Colegio Salesiano Miguel Unia, which served as a home for children with leprosy from 1899 until 1905. 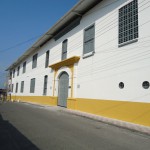 The Colegio Salesiano Miguel Unia today. The school was formerly an asylum for children affected by leprosy (1899-1905). (Photograph taken by Hernan Moya Ortiz.) 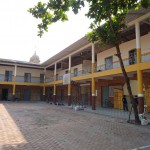 Inside the Colegio Salesiano Miguel Unia, formerly an asylum for children with leprosy. (Photo by Hernan Moya Ortiz.) 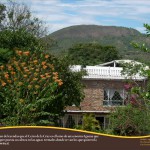 View of hills surrounding Agua de Dios. Local legends say that this hill, Cerro de la Cruz, is a huge sleeping iguana, with the hot springs at its head. 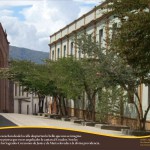 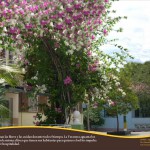 The residents of Agua de Dios tend flowers throughout the year. 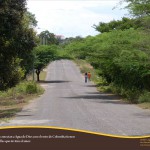 Road on the outskirts of Agua de Dios 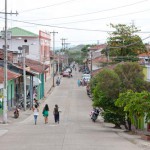 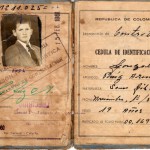 Identity card for a resident of the Contratación leprosarium. Photo courtesy of Mr Gonzalo Ruiz Arenas.

The scholarship on leprosy in Colombia can be found in

Diana Obregón, “The State Physicians and Leprosy in Modern Colombia” in Disease in the History of Modern Latin America: From Malaria to AIDS ed. Diego Armus (Durham & London: Duke U P, 2003): 130-157.

Abstract: Colombian physicians saw leprosy as an important area of inquiry in the late nineteenth and early twentieth centuries. In order to convince the government of the need to wage a battle against the disease, physicians unfolded a rhetoric where nationalist considerations as well as exaggeration played a principal role. They accepted the conclusions adopted at international conferences on leprosy, and adopted segregation as the only way to prevent the spread of the disease. The racist image of leprosy as an extremely contagious disease inflicting inferior peoples, arose from the imperialist expansion of Europe and the United States in the late nineteenth century when Westerners discovered leprosy in their colonial territories. Between 1903 and the 1930s the Colombian government imposed several regulations ordering the isolation of the sick, and established special institutions for leprosy. Around this time, isolation continued to be the main strategy to manage the disease, but medical rhetoric began to change. Doctors regarded leprosy as a curable disease and rejected compulsory isolation. The emphasis shifted to prevention and research. This new approach was connected with liberal ideas that were dominant at that time in Colombia.

As imperialist nations rediscovered leprosy in their colonial world in the late nineteenth century, Colombian physicians found endemic leprosy in their own country. The medical community was interested in constructing a national medicine to conform to ‘universal’ science. To medicalize leprosy, doctors provoked fears through exaggerating the number of leprosy sufferers to demonstrate that charity was incapable of dealing with the problem. The government approved laws of compulsory segregation of leprosy patients in the 1890s, while the 1897 international conference on leprosy held in Berlin gave international sanction to isolation. People actively resisted segregation as a violation of their individual rights. Dr Juan de Dios Carrasquilla studied the disease, experimented with serotherapy to cure it, and claimed that the flea was its agent of transmission. He combatted segregation and proposed instead a hygienic programme to improve environmental living conditions, but his approach was defeated. When the early twentieth century saw the consolidation of the Colombian state, modernization of the country became a national priority. The government started to take control of lazarettos, enforcing segregation of people, who were confined within an area circumscribed by a sanitary cordon. This strategy was a failure, since patients resisted segregation.

An essay of an annotated bibliography on leprosy and leprosaria in Colombia, 1535-1871: social construction, representations and management.
Authors: Claudia Patricia Platarrueda Vanegas and Catherín Agudelo Arévalo.

Between March and April 2002, we researched documents on leprosy in Colombia for the ILA Global Project on the History of Leprosy, under Diana Obregón’s tutorship. This increased our interest in the social study of leprosy through documents, and consequently, we decided to bring together our individual dissertation projects and construct an annotated bibliography, to obtain our respective Anthropology and History degrees. The research was directed by Diana Obregón and José Antonio Amaya, both lecturers at the Department of History of the Universidad Nacional de Colombia. It was prepared between May 2002 and June 2003. The resulting bibliography was put forward by the examiners for the ‘Tesis Laureada’ award.. We believe that our research objective meets the ILA’s interest in the description of archives related to those places where leprosy has been endemic.

When we first began the work, we built up a preliminary record of approximately 2300 printed papers on leprosy and leprosaria in Colombia, all produced from colonial times up to the present. This provided a way of identifying remarkable changes in the social management of leprosy and defining the chronological framework of the bibliographical compilation. We recognised a gradual process of construction of leprosaria, as well as the consolidation of rigorous isolation measures and the increase of medical authority on the definition of control practices for the disease. We read and recorded documents dated up to 1910, preserved in the libraries of Bogotá. At this point, we decided to impose more chronological restrictions, after realising that the number of items registered (close to 1200) exceeded the scope of the required dissertation. In the final phase, we limited the work to documents written between 1535 and 1871. During this period, a succession of governmental measures can be traced. These were promoted in order to found institutions for the assistance and control of leprosy. In 1871, the last of three Colombian leprosaria was founded, and remained throughout the twentieth century.

The catalogue reveals that leprosy affects the whole social environment and not only the medical one, thus influencing the construction of rules, policies and institutions, religious and philanthropic principles, meanings and cultural experiences, aesthetic and artistic expressions, among others. Finally, it shows that the leprosarium, more than a prophylactic institution, is the place where these definitions, representations, models, practices, and relations take shape, within the framework demarcated by stigma and exclusion. (Claudia Patricia Platarrueda Vanegas and Catherín Agudelo Arévalo)