In 1962, Dr K F Schaller, Chief of the Leprosy Control Service of Ethiopia, estimated that there were 200 000 cases of leprosy in the country. This meant there was an incidence varying from between 5 and 140 per 1 000 of population depending upon the concentration in different districts. (Fraser) There were doctors, nurses, and missionaries treating 30, 000 patients in seven provinces of Ethiopia at three hospitals, six segregation villages, two leprosaria, and numerous outpatient clinics. (Fraser)

Four Missionary organisations (the Sudan Interior Mission, the Moravian Mission, administered by Rev D S Sensenig, the American Baptist Convention, administered by Dr Schenck, and the Roman Catholic Mission) with the cooperation of the government each established establish a leprosarium. The government proposed to provide land and maintenance at the rate of 20c per patient, per day. (Fraser) 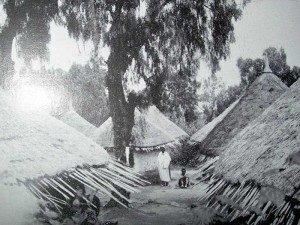 The Leprosarium of Harrar, in Ethiopia, 1920s (Jeanseleme)

In 1964, mobile clinics provided local treatment for as many patients as possible. (Browne, 79)

The Princess Zenebework Memorial Hospital, near Addis Ababa, was opened in 1932, with assistance from the American Leprosy Mission and the Sudan Interior Mission. The Order of Malta also established an institute for the study of leprosy in Tigre province. Ethiopia had been one of the first countries, if not the first, to request technical support from WHO in 1950.

Earlier attempts had been made to treat people without disrupting their daily lives. E W Price, who served as Chief of the Leprosy Control Project, Imperial Ethiopian Ministry of Public Health, Addis Ababa, reported on a novel approach to leprosy control, which he called a “market saturation” approach. He treated people on market days, when they gathered in their market places. This suited a country with a scattered population, poor communications and rudimentary health services. (Browne, 78)

Initial attempts at integrating leprosy into general medical services had fallen flat for several reasons. Static treatment centres were not suitable for such a scattered population, for a disease that was so stigmatised, and people were reluctant to draw attention to themselves by showing up at the specialised centres. The distribution of drugs was not well controlled either centrally or at the periphery. Clinics were poorly supervised and the standards of diagnosis and treatment were not good, then, “as a result of a bureaucratic decision to integrate, the regularity of attendance of patients fell to 10%, many of them failing to attend after the initial visit when they registered.” (Browne 79) Additionally, medical auxiliaries would treat other patients and overlook those with leprosy.

Ethiopia began a national leprosy control programme in 1983. (Rijk) A J de Rijk visited, as a short-term consultant for WHO, from August 15 to September 16, in that same year, in order to review the national programme and to give advice on implementing MDT. By then, Ethiopia had a population of 32,774,700. There were fourteen administrative regions and one hundred and sixty provinces, called Awrajas (districts), and about six hundred sub-districts or wereda. These were administered by the Provisional Military Government of Socialist Ethiopia. (Rijk, 2) The leprosy programme was entirely vertical, and 80,927 people were reported to be suffering from the disease. (Rijk 3)  Of these, ninety-three percent lived in the central and south-eastern highlands, where they were treated in more than eight hundred centres. At that time, WHO MDT was in the process of being introduced into five pilot areas: 6207 patients were on MDT and 1,115 had been released from treatment. (Leprosy Control in Ethiopia)

Ethiopia had been the stage upon which cold war tensions were played out between American-backed insurgents battling against the Soviet-backed Derg government, and from which Mengistu Haile Mariam emerged as ruler in 1977. In 1984, Ethiopia officially became a Marxist-Leninist state, and Mengistu became the secretary general of the Workers’ Party of Ethiopia. The new leprosy programme coincided with a natural disaster of epic proportions in the nation that had been aggravated by the political regime’s war against the Tigrayan People’s Liberation Front in North Wollo from 1980 to 1985. The Ethiopian famines of 1983-1984 impacted on eight million people and possibly a million people died. The famine, which followed the civil war, was especially severe in the highly leprosy-endemic districts/provinces of Wollo and Gojjam. Keneally writes that “The zone of severe famine coincided with the war zone and the phases of the developing famine corresponded with the military actions.” (Keneally, 139) The subsequent resettlement/villagization policy in 1985-86 brought Ethiopia to world attention and resulted in an outpouring of international aid. How these traumatic conditions impacted upon leprosy services and leprosy-affected people in Ethiopia is not apparent from WHO reports, although these events must have overshadowed the support given to the country’s espoused efforts to improve the health of its population, even while it was in the process of removing people from their traditional lands and resettling them in poorly suited and barely adequate sites with people from alien tribal groups or with people of other ethnicities.

Also in 1984, President Mengistu Haile Mariam announced that forty-six percent of the Ethiopian Gross National Product would be allocated to military spending, creating the largest standing army in sub-Saharan Africa; meanwhile, the allocation for health in the government budget fell from six percent in 1973/1974 to three percent in 1990/1991. The impact on the leprosy control programme must have been traumatic, but the impact on the displaced and starving population shocked the world. *1

A J de Rijk, “Report on a WHO-Short Term Consultancy to the National Leprosy Control Programme in Ethiopia: August 15-September 16 and 12 days in October 1983”.