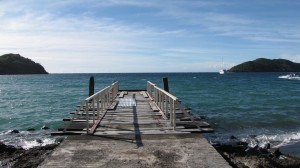 Leprosy was evident throughout other islands of the Pacific. In 1899, Fiji introduced a Leprosy Ordinance, and in 1911, the settlement on Makogai was opened. It was run by a French order of Nuns, the Missionary Sisters of the Society of Mary. By 1918 there were over 300 patients. More people were added in 1925 when people were sent from the leprosy settlement on Quail Island. There was strict segregation between living quarters of staff and patients. Patients were further grouped by nationality and gender. Patients were responsible for constructing their own buildings and farming. The nuns provided nursing and facilities, including schooling, sports, postal and banking services, film screenings, and a photographic dark room. (McMenamin)

Historical newspaper article on Makogai and the Ordinance in Kai Tiaki : The Journal of the Nurses of New Zealand 17.1 (1927): 6. [NB: use of the proscribed terms referring to people with leprosy]

History: Sister Mary Stella, Makogai: Image of Hope: A Brief History of the Care of Leprosy Patients in Fiji (Christchurch: Leper’s Trust Board, 1978)

Jane Buckingham, “Leprosy in the Pacific Islands” WHO Goodwill Ambassador’s Newsletter for the Elimination of Leprosy 28 (October 2007)

View of the Bay, Makogai, Fiji