As a result of his acquaintance with the Sœurs Notre-Dame des Apôtres, Raoul Follereau knew of their vision for the settlement of Adzopé on Ile Desirée in Côte d’Ivoire in 1939. Raoul Follereau, was born on 17 August, 1903, in Nevers, in France, to a modest and devout Catholic family. He was only fourteen when his father died fighting in World War I, in 1917. By all accounts, he was a precocious teenager who loved writing poetry. As a young man, he stood out as confident and self-assured and with his own very definite and not necessarily obviously popular trajectory. Once he knew of their vision for Adzopé, he set about supporting them by raising the funds so that they would be able to realise their dream:

In order to obtain funds, I had one means only at that time: the word. So I started talking about Adzopé. For ten years, accompanied by two of the Sisters … I was to travel all the roads of France for this purpose. And after France, Belgium, Switzerland, Algeria, Tunisia, Morocco and Canada. (Wall 78) 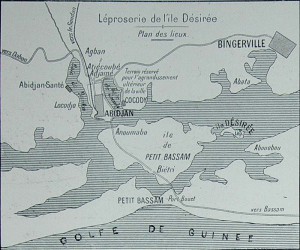 He launched his campaign in Annécy in 1943 during the Occupation. The money collected was sent to the mother house in Vénisseux and then to the Ivory Coast. In 1950, he visited the township that had been established, fifteen kilometres outside Adzopé:

The leprosy colony is 15 kilometres from Adzopé. It is reached by a road running through the forest – a road which the Sisters beat out yard by yard, then imposed on the forest. Yard by yard over 15 kilometres! They threw thirteen bridges over the marigots, or branch-channels, inhabited by somnolent caymans. Nothing, no one, can give the faintest idea of this gigantic task. But when I exclaimed in wonder, Mother Julia said in her calm voice, “Oh, it was nothing.” And indeed it was nothing compared with what was to come.

It lies at the top of a slope. One comes on it suddenly. We had gone on and on through the oppressive forest, then suddenly there was light, space, life. A few months before, and that, too, had been forest. But the forest had retreated in front of charity … (Wall 79)