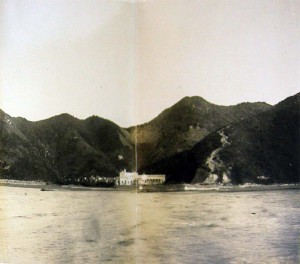 When it was established, the colony on the island of Tai-kam was described as being one hundred miles from Canton, in the South China Sea and two miles from the shore of Chik-kai County, Sunning, where Sun Yat-Sen’s house could be seen on the shores.

Dr Wu Ting-fang purchased it from the owners, who were fishermen. He planned that it accommodate leprosy-affected people in the Sz Yap and Canton regions, and he presented it to Rev and Mrs John Lake, “for the noble task of ameliorating the sufferings of people with leprosy in the thickly populated Sz Yap and Canton Delta regions.” The General of the Nationalist Armies, Chiang Kai-Shek, provided Mr Lake with government gunboats to make his way to Tai-kam through the troubled district.

Establishing the colony was described as “a gigantic philanthropic enterprise” in a beautiful natural setting: 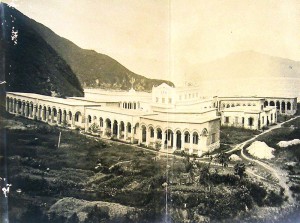 “In nature’s sunny moods the wealth of colour here furnishes a living canvas, fit for the brush of a Parrish to capture. A kingfisher may be seen skimming lightly by, dipping his feet into the deep blue waters, while the pulsating red of flowering plants on the hills above, and the yellows and purples of irises below, quiver, like the rippled sea beyond, in the faint morning breeze.”

It was also a haven for pirates. The committee planned village units to house two hundred each. Every group was to have its own chapel, hospital, and cottages.  It was designed to fit the idea of village life and village government and to care for the physical and spiritual welfare of the people 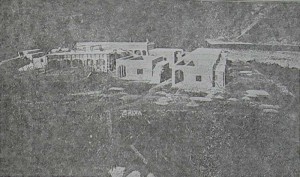 The site in the course of construction (Leper Quarterly)

On August 4, 1927, Lake reported that sixteen brick and stone cottages had been started:

My wife and I have gone back and forth unmolested by the pirates that swarm these troubled waters during these troublous times; and during these troublous times, whether we were on the island or not, the building continues and is still going steadily forward – everyone, from the superintendent and the foreman to the workers on the rock pile, being Chinese – nearly all of them ex-robbers. Those of their number who are in positions of trust are now devoted Christians; and even the roughest of men are friendly to use and to Christianity … Thus, we have retained the good-will of the officials and the people, even when the anti-foreign feeling and anti-Christian propaganda swept the country and great mission hospitals were closed to strikers, and confiscated; we have made friends with pirate chiefs and their thousands of armed followers along the wild coast; and we are able to travel back and forth with perfect freedom. (Leper Quarterly: Chinese Mission to Lepers 2-3 (1928-1929) (Incomplete) and George Kin Leung, “Tai-Kam, A Paradise for Lepers”, The Leper Quarterly 2.1 (1928): 11) 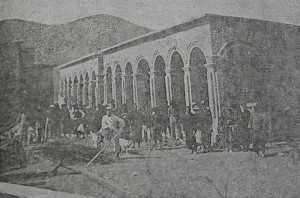 One of the dormitories in the course of construction (Leper Quarterly)