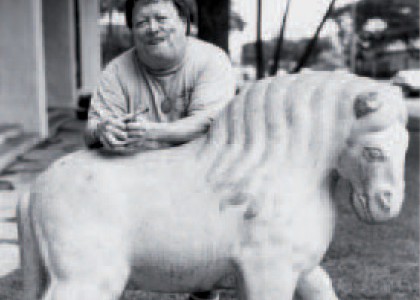 A Quest for Dignity

Originally published in the WHO Goodwill Ambassador’s Newsletter for the Elimination of Leprosy, Issue No. 11 (December 2004). The information was correct and current at the time of publication. 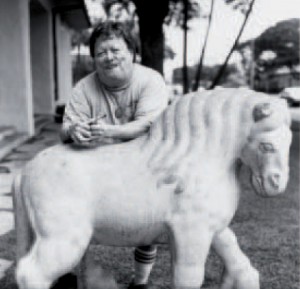 Bernard outside the Honolulu Academy of Arts.
Photo by Pamela Parlapiano

Bernard K. Punikai’a was born in Honolulu, Hawaii. He was diagnosed with leprosy at the age of six, taken from his mother, and later forcibly isolated on the remote Kalaupapa peninsula, island of Molokai, in 1942.

From an early age, he was involved with politics at Kalaupapa and was a member of the Citizen’s Committee that abolished Hawaii’s outdated isolation law in 1969. He was a leader in the battle to prevent the state government from closing down Hale Mohalu, the residential treatment facility near Honolulu that had provided an alternative to living at Kalaupapa since 1949.

When Hale Mohalu was ultimately bulldozed in 1978, Bernard was a leader in creating the Coalition for Specialized Housing, which developed affordable housing on the Hale Mohalu site for senior citizens and persons with disabilities.

Bernard gave the keynote address at the Opening Dinner Reception for the Quest for Dignity Exhibit, when it was launched at the United Nations in 1997.

It was Bernard who coined the phrase “Quest for Dignity”, which has come to symbolize worldwide efforts aimed at reaffirming the human rights and humanity of all those who have had leprosy.

An accomplished composer and musician, Bernard has written many songs including “Out of the Darkness”, which was composed specifically for the Opening of the Quest for Dignity exhibit at the UN.

In 2000, Bernard was elected as IDEA’s President for International Advocacy*, a position he still holds. In 2002, Hawaii Governor Ben Cayetano declared August 29 — Bernard’s birthday — as “Bernard K. Punikai’a Day” in honor of his lifetime of achievements and contributions to society.

Speaking up has been a way of life for me. To be silent is to be part of the oppression.

“When I reflect back on my early life, going back to age four or five, I can see that a pattern had been established whereby some people would describe me as being a renegade. One of the things that really gets to me is fairness and fairness in how you treat people. I have always been concerned about fairness, rights, civil rights, human rights, how people treat other human beings. I like to think that whenever I notice any kind of injustice or unfairness, that I will not be silent. Speaking up has been a way of life for me. To be silent is to be part of the oppression.

“Anytime anyone is diagnosed with this disease, they are traumatized because they are burdened with 3,000 years of stigma, fear and rejection. Your belief is your reality and all too often, your beliefs about the disease stem from what you’ve heard about the stigma, fear and rejection. We can no longer sit by and watch people’s identities and people’s lives be destroyed by the stigma associated with this disease. We are your sons, daughters, fathers, mothers, brothers, sisters, grandparents. We are truck drivers, poets, teachers, politicians, musicians, artists and so much more. We refuse to allow people to define ourselves, our humanity, by a disease.”

* The International Association for Dignity, Integration and Economic Advancement (IDEA) is the first organization whose leadership is largely made up of people who have been affected by leprosy.

“We want to be part of the process…. To be in a position to help others as well as ourselves.” Quest for Dignity