Originally published in the WHO Goodwill Ambassador’s Newsletter for the Elimination of Leprosy, Issue No. 35 (December 2008). The information was correct and current at the time of publication.

G. Venu Gopal is part of the National Forum’s push for social integration. 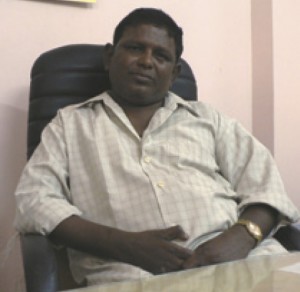 G. Venu Gopal, 56, sits at his desk in the North India office of the National Forum of people affected by leprosy and reflects on the progress the organization has made in its first three years. As branch general secretary, Venu Gopal oversees a 17-strong committee that represents the interests of some 250 self-settled leprosy colonies in 10 of India’s northern states.

“Now all the leprosy-affected persons of India are on one platform. We are united. We have the chance to know about each other, even though we are living in different states. We feel it is a great achievement for us. Without such unity, it would not be possible to reach the goal of socio-economic empowerment.”

For Venu Gopal, it is also a great personal achievement. “I had been working in a small circle before the establishment of this National Forum office. Now I have the chance to serve many people in a broad way,” he says.

“Now I have the chance to serve many people in a broad way.”

Originally from Andhra Pradesh, Venu Gopal was diagnosed with leprosy during his second year in college, leaving him unable to complete his degree. After seeing the social stigma that attached itself to his family when he was hospitalized for treatment, he decided to leave home.

Concealing his condition, he worked for a year as the assistant to the Norwegian chief engineer of a steel plant construction project. On the job, Venu Gopal picked up basic accounting and other office skills. Then he moved to Delhi after a person affected by leprosy told him there was less discrimination in the north. “You are educated,” the man told him. “Come with me. You can do something.”

His new acquaintance helped him to join a colony and Venu Gopal became involved in a number of different organizations. “I learned more, and asked people to show me when I didn’t understand things,” he says. Over time, he gained the skills and experience that he now puts to good use as National Forum branch general secretary and as a community worker for Help Age and Help Age International, for whom he monitors the welfare of 300 elderly leprosy-affected people. “It took me 10 years to learn to handle all these things. Now I am capable. I can speak six languages,” he says proudly.

Venu Gopal recalls his first visit home, following his marriage to the daughter of a person affected by leprosy with whom he has three children. “When they saw I was established, some people treated me well,” he says. “Gradually, things are changing. Now among our circle, nobody hates me.” But facing society is still very hard, he admits. “I don’t know, when I am with 100 people, if there is one person who might hate a leprosy-affected person. If there is, then I will be insulted. I am not thinking about the 99 others, I am thinking about that one person.”

In their drive to empower people affected by leprosy, Venu Gopal and his National Forum colleagues are visiting every colony in every state, encouraging them to stand on their own feet and urging them to turn their back on begging. In the process, he is telling them to make income-generating projects a priority, and instructing them in how to draw up proposals for funding that can be submitted to the Sasakawa-India Leprosy Foundation (SILF), with which the Forum expects to work closely.

Moving forward with such applications is important, he says, because expectations among people affected by leprosy are rising. “If we only organize workshops and conferences, we won’t fulfill our aims.”

Venu Gopal is confident that the pace of social integration will quicken when SILF is ready to start issuing grants, but he is realistic enough to know that change won’t occur overnight. “We are talking about 1 crore 20 lakhs (12 million) people affected by leprosy,” he says. “There are crowds of people out there, in so many different places. They are still living in small huts; they are begging. You can imagine: is it possible to see changes in a couple of years? It is a crusade. I think it is a crusade. And I am proud that I am part of this crusade.”