Baba Amte: Man with a Mission

Originally published in the WHO Goodwill Ambassador’s Newsletter for the Elimination of Leprosy, Issue No. 26 (June 2007). The information was correct and current at the time of publication.

An Indian social activist who has been an inspiration to millions 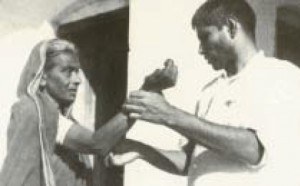 I first came upon the story of Murlidhar Devidas Amte in a newspaper article. Intrigued, I wanted to find out more, and went to visit him several times at his “Garden of Joy” in the state of Maharastra. The more I learned, the more I was filled with wonder and amazement at his achievements and decided to write a book.

Born in 1914, Murlidhar grew up in an affluent household and became a lawyer. As a young man, he had a taste for good clothes, movies and fast cars; but he also had a social conscience, which caused him misgivings about India’s caste-ridden society and the state of poverty and oppression in which so many lived. However, attempts to reach out to his fellow man met with stiff resistance from his father and the high-caste circles in which he moved. 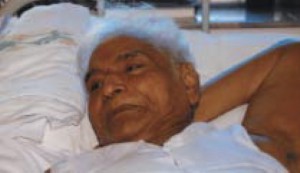 Baba as a young man (top), and today

Influenced by the likes of Mahatma Gandhi, with whom he spent some time, and by Vinoba Bhave, Gandhi’s spiritual successor, Murlidhar eventually turned his back on the comfortable life and began organizing the downtrodden into unions and fighting for their rights. He even lived and worked among them to experience their plight.

One day, while working as a scavenger, he stumbled upon a man so terribly afflicted with leprosy that what little remained of his body barely suggested he was once human. At first, Murlidhar fled in fear; later, he returned, realizing that the only way to mitigate the fear he felt was to replace it with love. It was a turning point in his life. Aged 34, he decided to devote himself to the care and rehabilitation of leprosy patients.

After spending some time acquainting himself with leprosy and its treatment, he set out with a young wife, two infants, a lame cow, four stray dogs, six people affected by leprosy and a handful of Rupees for 50 acres of scrubland donated by the Maharashtra government. Amte, who was now called ‘Baba’ (father), named the place Anandwan, or Garden of Joy, which he described as “an outcast land for outcast people.” Together, they turned these barren acres into a successful example of rural development and community living.

Baba’s wife, Sadhna Tai, deserves special mention. Raised in an orthodox Hindu tradition by a family of Sanskrit scholars, she relinquished all caste prejudices upon her marriage to Amte, and worked alongside him in even the most difficult circumstances. In 1949, their untiring efforts led to the foundation of Maharogi Sewa Samiti (MSS), an organization for curing and rehabilitating the leprosy affected. It was registered in 1951.

This was also the year that Vinoba Bhave inaugurated Anandwan. Bhave noted: “Its name ‘Anandwan’ is most appropriate…This is not a lepers’ colony, not a home or settlement for leprosy patients. Here a new epic of service and labor is being written.” More patients began to arrive, medical services were started, and within a couple of years it was self-sufficient in everything.

Today, Anandwan has grown to 450 acres, and is a thriving community of people affected by leprosy as well as others with disabilities. It is testament to the power of Amte’s motto, “Charity Destroys, Work Builds.”

Baba did not rest with Anandwan. In addition to establishing two more rehabilitation centers for leprosy-affected persons.Ashokwan in 1955, and Somnath in 1967.he also diversified into other areas, beginning projects for tribal peoples and persons with disabilities. He also became actively involved in the protest movement against the construction of big dams in India.

Now 92 and bed-ridden as a result of a degenerative spinal injury, Baba Amte continues to welcome visitors and draw accolades. He numbers among his friends the Dalai Lama, who wrote in the Foreword to my book: “In creating Anandwan, (Amte) provided a practical opportunity for people even with crucial disadvantages to show that they could regain dignity and come to be recognized as productive members of society.”

In the Dalai Lama’s words, Amte is a man “who has consistently put others before himself; a living example of true compassion in action.” I could not agree more.