Brushing Away the Pain

Originally published in the WHO Goodwill Ambassador’s Newsletter for the Elimination of Leprosy, Issue No. 53(December 2011). The information was correct and current at the time of publication.

Self-taught Brazilian artist believes in painting’s capacity to heal and to help others. 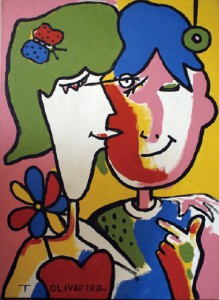 Tadeu: “Good things have happened to me. I want to give something back.”

Every morning José Tadeu Bezerra de Oliveira comes back to the former hospital colony where he was confined at the age of 12 with Hansen’s disease and teaches art to all those who still make their life there. It was here in Santa Marta* that Tadeu developed a love of painting; through painting, he hopes to help others experience the contentment he has found.

Santa Marta and its environs have been Tadeu’s home for the past 30 years. Now 42, he was diagnosed with leprosy in 1983 after a stone became lodged in his foot when he was playing football. His mother found it strange that it didn’t bother him, so took him to their local health center in the north of Brazil’s Goiás state. He was referred to Santa Marta hospital colony in Goiania, the state capital, for a “routine examination” following which he thought he would be free to go home.

Instead, Santa Marta became his home. Although the policy of compulsory segregation of persons with Hansen’s disease had already been abolished by law, it was still being applied in Goiás state and Tadeu became another of its victims. He was unfortunate also in that he would eventually lose part of his right leg to complications arising from the disease.

Without art I probably would have been one more person who self-destructed.

Tadeu took up painting, using materials provided by charity groups. He identified himself with the Renaissance artists. “Perhaps I was one in a previous life,” he muses. Around him, he watched fellow inmates turn to drink and end up in the colony jail for infringing its rules against consuming alcohol and spending time with the opposite sex. There were many suicides.

“Without art, I probably would have been just one more person who self-destructed. Art provided a bridge between suffering and the life I now enjoy outside [the former colony], where I feel at ease and fulfilled,” he says.

Not everyone found that bridge or was able to cross it. “Lack of proper medical care can be a form of imprisonment,” he says. “If you develop disabilities there is a tendency not to want to live on the outside, because you are psychologically damaged as a result of your experiences. That is why people killed themselves or never left, even though they were entitled to in later years.”

Tadeu’s experiences have convinced him that to treat someone with Hansen’s disease, you have to know the whole person. “For me, Hansen’s disease is not only a physical condition. There are psychological factors at work that can cause the lesions and after effects to become more severe,” he says. “You need to take a person’s psyche into account as well. That way, you can lessen the toll the disease takes.”

In addition to pursuing his art, Tadeu has also pursued compensation from the authorities for the way he and others like him were segregated in hospital colonies. As the government didn’t accept claims from those who were forcibly confined after the official end of that policy, he had to make many trips to the capital Brasilia to press their case – including one just four days after his leg was amputated. He is also supporting the compensation claims of children taken at birth from parents who had Hansen’s disease.

A father of two who is married to the sister of a former patient, Tadeu offers his services to Santa Marta on a volunteer basis. There is an arts and crafts house where he works with long-time hospital residents with physical and mental disabilities, as well as doing his own work, which he sells around town. He looks and sounds a man at peace with himself.

“I think of this place as my atelier,” he says with a smile. “Although I have a disability, good things have happened to me. I want to give something back.”

José Tadeu Bezerra de Oliveira teaches art at the former hospital colony in Brazil’s Goiás state where he was sent at the age of 12.