Originally published in the WHO Goodwill Ambassador’s Newsletter for the Elimination of Leprosy, Issue No. 52 (October 2011). The information was correct and current at the time of publication. 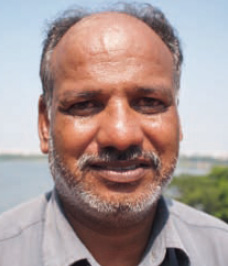 SLAP President V. Narsappa: “Everyone must be a leader.”

It may not have the most felicitous acronym, but the Society of Leprosy Affected Persons, or SLAP, doesn’t mind one bit if it gets your attention. Founder and President Vagavathali Narsappa set up the organization in 2006 to promote a better quality of life for people affected by leprosy in the Indian state of Andhra Pradesh. It is the umbrella group for the state’s 101 leprosy colonies and is affiliated with the National Forum, the nationwide networking organization of people affected by leprosy that Narsappa serves as trustee.

Narsappa was 10 years old when he was diagnosed with leprosy. His village wanted him gone, so his father took him to Victoria Hospital in Nizamabad and left him there. “Can you conceive what it was like for a young child to be abandoned by his family?” he asks.

Leprosy marked him out. He describes taking the school exam for Class 7. “A government official dropped the exam paper in front of me and wouldn’t let me in the building. I had to do the test sitting in the hot sun. But I passed and got good marks.” Subsequently, when he failed the exam for Class 10, his formal education came to an end.

Finding it difficult to work because his fingers were reduced to stumps, Narsappa was forced to beg. This humiliation, along with everything else he had experienced, forged him into an activist. “I looked around and saw that other sectors of society had organizations, and thought, ‘Why not us?'”

He started his first group in a few districts of Hyderabad, where he was now living. One of his early actions was to organize a rally in February 2004 seeking an increase in the disability pension the state paid persons affected by leprosy. This was duly achieved when the amount was raised from 200 to 500 rupees. However, like all the struggles Narsappa engages in, it took time – four years – and the pension is still not enough, he says.

“The problems we face will not all be fixed in a day or two. Solve one, and another takes its place. We are constantly fighting the government for our basic rights,” he says. For a while, when the government wouldn’t listen, SLAP began presenting its demands to a government-funded statue of Mahatma Gandhi – a media-savvy way to draw attention to the impasse.

SLAP’s demands cover the spectrum – from basic amenities for colonies and better leprosy services to educational opportunities for children from affected families. Narsappa, aware of the shortcomings in his own education, attaches particular importance to seeing that the next generation receives a proper schooling.

“Education plays a pivotal role in the growth and development of society and (the) nation,” he wrote in a letter he presented to the Governor of Andhra Pradesh recently. Healthy children should not suffer just because their parents are affected by leprosy. They should not become a burden on the community because they did not receive educational support.

Narsappa says that watching an account of his life makes him cry.

Social integration is the goal, but it will take time, he believes. “Our children are healthy, but society does not accept them. People say it’s nice that leprosy is curable, but they are not ready to integrate with people who have had the disease.”

One way forward will be economic success. “When people see a big building, a car, a good suit, there is no stigma,” he says. “But if they see someone who is poor, there is stigma.”

Narsappa keeps a diary of his activities, meticulously recording who he met and what was discussed. In his correspondence with government officials, LEPRA India plays a supportive but unobtrusive role.

“I have no job,” Narsappa says. “I only have the work of an activist. I am always thinking, ‘What must we do to achieve success?'” His answer is that everyone must get involved. “Everyone must be a leader,” he says.

Featured in a British television documentary earlier this year, SLAP’s president says that watching an account of his life makes him cry. “I have been through so much.” But it’s those experiences that motivate him to keep on doing what he does best: not literally “slapping” people in the face, but making sure they sit up and take notice when he talks about the struggles borne by people affected by leprosy and demands recognition of their needs and rights.