Originally published in the WHO Goodwill Ambassador’s Newsletter for the Elimination of Leprosy, Issue No. 23 (December 2006). The information was correct and current at the time of publication.

Once a monk with leprosy, Leng Sophea is now a happily married teacher 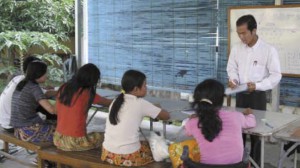 Leng Sophea gives a Khmer lesson to young women who have had reconstructive hand surgery.

I was born in 1984 and grew up in a poor family in Cambodia’s Kandal Province. I lived in a village with my parents Cheng Peng Leng and Youen Yenh and my two sisters and three brothers.

In 1997, I left home to go and live for one year with relatives. In 1998, I moved into a pagoda. I studied Khmer, Cambodia’s national language, for one year with a monk. I became a monk the following year, when I was 15.

In 2000, I realized that something was the matter with my health because I was developing symptoms such as a puffy face, claw-finger, drop-foot and the inability to close my eye. I found a Khmer doctor to examine me. He did not know what was wrong but he treated me with traditional medicine for one year.

I was getting better. From 2000, I also began studying the Baley language in addition to Khmer. These studies took me to Phnom Penh.

Then my condition began to take a turn for the worse. I went to another Khmer doctor who examined me and told me I needed to go to a health center.

But my illness was progressing. My claw-hand and drop-foot were becoming worse. So I thought about it again and decided I should go and see a doctor. I didn’t know what was going to happen to me.

As he explained the disease, he told me that I could be cured. But he also said leprosy stigmatizes those who have it, and many people are afraid of it.

When I heard this, it made me very sad. I didn’t want to live in this world anymore. I wanted to die.

I didn’t tell my family about leprosy. I kept my condition to myself and lived alone with my worries, which were so big. I stayed in my room in the pagoda for one year. I didn’t want to go out and meet people.

“I didn’t want to live in this world any more. I wanted to die.”

Between 2003 and 2004 I was treated with MDT at a health center in Kandal Province. At the end of 2004, I had reconstructive surgery on my hands and feet.

After that, I got a job with CIOMAL at the Kien Khleang national leprosy rehabiliation unit. I now work as a Khmer language teacher and support worker. I stopped being a monk in 2005.

In July 2006, I got married to Van Tavy and have found happiness in my life.

I have had leprosy, but I will not let the disease stigmatize me. As to the future, I hope to study at university one day.

In the meantime, my message to everyone is: if you have any problem, please hurry and see a doctor or go to a health center.

Leng Sophea works as a Khmer teacher and support worker at the Kien Khleang national leprosy rehabilitation unit in Cambodia.