Originally published in the WHO Goodwill Ambassador’s Newsletter for the Elimination of Leprosy, Issue No. 36 (February 2009). The information was correct and current at the time of publication.

Liu Zhen Xi speaks of the experiences of people affected by leprosy in China.

I was diagnosed with leprosy at the age of 13. Soon after, I was forced to drop out of school and enter a leprosy hospital.

After about nine years of treatment, I was discharged. Unable to return home, however, I lived alone in a small hut next to a sugarcane field. I thought I could fend for myself and face up to the stigma, but I couldn’t bear the way the discrimination affected even my family and relatives. After learning that my nephew’s girlfriend had run away when she found out his uncle had had leprosy, in 1993 I moved to a leprosy village.

Mine is not a special case. Many people affected by leprosy in China have undergone similar experiences. People are still being turned away from public facilities, denied access to public services and prevented from going to school or getting a job.

In April 2008, Ms. Liang Yuehui, a 70-year-old woman who lived in my village, required emergency medical treatment. We called an ambulance, but when it reached the outskirts of our village, the ambulance crew refused to proceed further after discovering where they had come.

They complained that we hadn’t told them we lived in a leprosy village, and said they didn’t have the means to isolate the patient. Even though we assured them there were no leprosy patients in the village and that no one was infectious, they wouldn’t change their minds and drove off. As a result, Ms. Liang did not receive the treatment she required and died one month later. 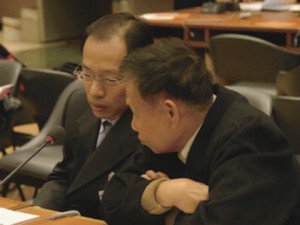 Another incident in 2008 also troubled me greatly. When HANDA was organizing a get-together with residents from another village to promote communication and exchange, we planned a dinner at a local restaurant. We booked a table and paid for the reservations.

But just a few hours before the meal, the restaurant canceled our booking and insisted on returning our money. Even though we explained about leprosy, they refused to serve us. “We can’t have leprosy patients eating at our restaurant,” they said. “If other people found out, we would soon have to close down.”

“I keep asking myself why we can’t live normally like other people.”

These are just a couple of incidents that I experienced personally last year, and there are many other examples of stigma and discrimination happening around me.

Mr. Zhong is a skillful welder who was fired by his company when they found out he once had leprosy. Our colleagues in Sichuan Province were turned away by a small hotel in Duiping, Jinyang County, when the staff learned they were from Jinyang leprosy village. The children from Xide leprosy village were not allowed to study at the local public school just because of where they lived.

All these stories pain my heart. I keep asking myself why we can’t live normally like other people and enjoy the same treatment and equal rights. But I realize that day will come, only when more attention is paid to our rights and the public has a better understanding of leprosy.

In recent years, the Chinese government has been trying to bring about a harmonious society. It has made a tremendous effort to improve the living conditions of people residing in leprosy villages. There are also some NGOs, volunteer groups and warmhearted individuals in China that are working together to fight against discrimination. More and more people are starting to understand and accept those of us affected by leprosy, and now we are able to participate in the wider community. But as the examples above show, stigma and discrimination still exist.

This article is based on a presentation Mr. Liu made at an informal consultation on the elimination of discrimination and stigma against people affected by leprosy and their families in Geneva on January 16, 2009.

Liu Zhen Xi is vice president of the HANDA Rehabilitation and Welfare Association, an organization of people affected by leprosy in China. He lives in a leprosy resettlement village in Guangzhou Province.