Originally published in the WHO Goodwill Ambassador’s Newsletter for the Elimination of Leprosy, Issue No. 68 (June 2014). The information was correct and current at the time of publication.

A Romanian pastor has a special bond with his congregation. 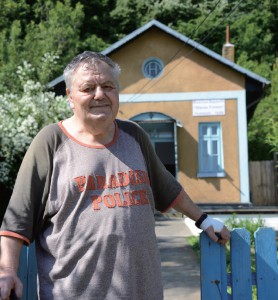 Romica Nedelcu is ministering to his small flock at the Baptist church at Tichilesti, Romania’s only leprosy sanatorium, as he does every Sunday. Casually dressed – as casually as most of his congregation – he sits at a desk decorated with a flower plucked from in front of the 75-year-old church that morning.

If Romica looks very much at home among the residents of the sanatorium, it is because he used to be one himself. These are old friends and neighbors who have a shared experience of leprosy. “We are like family,” he says.

Born in 1944, Romica entered Tichilesti in 1956 at the age of 12. His mother, who preceded him there by four years, burst into tears at finding him marked by the same disease. Romica, for his part, was glad to be reunited with her.

Coming to Tichilesti signaled the end of his formal education. He passed the time playing chess and backgammon, going fishing and watching TV. Occasionally, with the doctors’ permission, he was allowed out to visit his father. 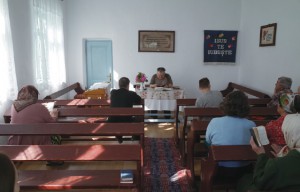 Romica takes the service on a recent Sunday in May.

As he grew into manhood, he lived from day to day, not knowing how long he would remain at Tichilesti or when his treatment would end. He began drinking, smoking and playing around. “I had several girlfriends,” he admits.

At 27, Romica came to the realization he was heading down the wrong path. It happened at 9.30 on May 9, 1971. He had come back from the city of Constanta, where he had been treated in hospital for a stomach complaint, and began to read the Bible. “I had been forced to read the Bible before,” he said, “but for the first time the Word entered my life. I knew I had to change my ways.”

Romica believes God gave him leprosy and that through leprosy he found God.

A PASTOR IS BORN

He began assisting the elderly minister at the Baptist church. Eventually, he was taking the service himself. “God put in me the ability to preach the Gospel,” Romica says.

He also settled down. He met his future wife through an introduction and after a three-year courtship they married and set up home in the nearby town of Braila, when he was 34. They have two sons and a daughter.

Religion was strictly controlled during the Communist era, but the church at Tichilesti continued to function. “I can’t speak for the Communists, but I expect they felt that a church operating in such a secluded location wouldn’t have much influence.”

Even so, the secret police occasionally came calling—once because letters containing Bible passages that Romica had sent anonymously to senior Communist Party officials were traced back to him.

Romica believes God gave him leprosy, and that it was through leprosy that he found God. “If I had not got leprosy, I probably would have stayed in the city without God in my life.”

Concerning the Bible’s portrayal of leprosy as a disease of the unclean, he says he is careful not to use leprosy as a symbol of sin, “because that doesn’t have relevance to the people here.” He goes on: “Jesus didn’t discriminate against people with leprosy. He was there for everyone. I am the same.”

He says he is not ashamed of leprosy nor tried to conceal his history of the disease. It has given him an affinity to feel the pain of others, something he believes that everyone in Tichlesti has.

“I am fulfilling my purpose in life,” he says. “It’s a miracle.”