Originally published in the WHO Goodwill Ambassador’s Newsletter for the Elimination of Leprosy, Issue No. 66 (February 2014). The information was correct and current at the time of publication.

In Indonesia, a man is dumped in a ravine by his family because he had leprosy.

In 2012, 18,994 new cases of leprosy were reported in Indonesia, with those afflicted facing life as outcasts. They are often abandoned by their families, with no prospects of education or jobs.

The story of one leprosy patient has recently shocked authorities, but the fate of 43-year-old Sutarip from Probolinggo Regency in East Java Province resembles that of many. He was literally thrown away like garbage by his own family into a ravine in a forest.

“(At home) I have a rice field… Why should I have to eat those animals?” he asked.

Prayogo Santoso, who works as a nurse at a local public health center had heard about his case. His village was only a few kilometers away from the forest and he decided to go and look for him.

“I went there and found Sutarip in the forest, 600 meters below a hill,” Prayogo said.

He had been living in the forest for two years — two years since his family dumped him there without any food or water. He survived eating wild animals and drinking rain water.

Prayogo visited him three times before he was finally taken to a hospital, and each time he saw him preparing different animals for his meal, including a snake, a grilled rat and a cat. “I once brought some food for him and was about to throw the grilled rat away when he asked me not to do so,” the nurse said.

“He told me, ‘Today, I can eat your food, but how about tomorrow? What can I eat if you take the rat away?’” 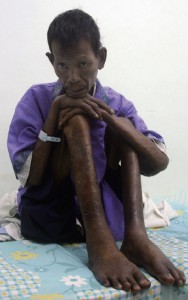 Sutarip could barely stand up, let alone walk, when Prayogo visited him. His limbs were stiff, as the disease had started to attack his peripheral nerves. He could only lie down in a hole he had dug himself and weighed just 29 kilograms.

Sutarip was eventually brought to a leprosy hospital in the village of Sumberglagah, about 100 kilometers from the forest.

“We gave him a bath after he arrived, because he was very dirty and smelly. We also gave him milk, protein and carbohydrates, which were urgently needed because of the lack of nutrition,” Budiastutik Kusharjuni, director of Sumberglagah Leprosy Hospital, said.

After five days in hospital, Sutarip put on one kilogram. He is now able to sit, stand up and slowly walk when he needs to go to the toilet. But Sutarip is still in a lot of pain and suffers from depression. He spoke little and cried when asked about his diet in the forest.

“(At home) I have a rice field…Why should I have to eat those animals?” he asked with tears streaming down his face.

Although Sutarip’s case may sound extreme, it is not uncommon in Indonesia. Most people affected by leprosy live in poverty due to stigmatization and discrimination. Many Indonesians still believe leprosy is a curse from God and a genetic disease. If a family member has leprosy, the relatives have to get rid of him or her, or else the entire family would be cut off by the community.

“And once a person with leprosy is exiled, in many cases, he or she will live alone forever because the family will refuse to take them back,” Teguh Heri, supervisor at Sumberglagah hospital, said.

He said the hospital has had some patients who were hospitalized for more than 40 years. Currently, the eldest patient is a 90-year old woman, who has been in Sumberglagah hospital for 45 years. “Some were here until they passed away and we buried them here as well because their families refused to pick up their bodies,” Teguh said.

As for Sutarip, one of the doctors treating him admits that what comes next is unclear. “We don’t know what the future holds for him once he has recovered and left the hospital,” Edi Cahyono said, adding that Sutarip may be discharged within a month.

Talking about the future, Sutarip, who once worked as a sugar cane farmer, seemed preoccupied with plans of finding a wife. While he was happy about the new shirt and trousers given by Teguh, he was unhappy with his new pair of sandals, which he said were not good enough to attract women.

Divorced twice, Sutarip said his biggest dream is to begin a new life with a beautiful woman, leaving the trauma of the disease behind him.

Christine T. Tjandraningsih is a reporter with Kyodo News Service.
This story, in edited form, is used with the permission of the news agency.