Ean Nee Tan and Joshua Wong have produced a beautiful collection of stories developed from interviews with people who lived in Sungai Buloh Leprosy Settlement, just outside Kuala Lumpur in Malaysia. The Way Home: The Isolated Emotional World of Former Leprosy Patients and Their Descendants, translated by Khor Jiak Ling (Malaysia: Jesprin Sdn. Bhd., 2012), offers a collection of stories of leprosy patients told first-hand and collected by the authors. It covers two generations of people: those isolated in the settlement and also their descendants.

Their authors’ first contact with the people of Sungai Buloh came about as a result of the 2007 protests at the demolition of the eastern part of the settlement. To draw attention to the impact of this, they produced the video “The Everlasting Valley of Hope”. 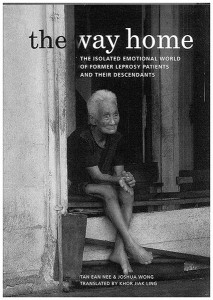 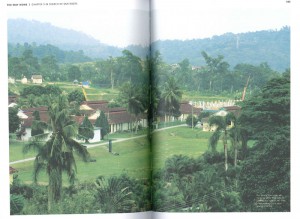 Inside the book: showing a view of the Sungai Buloh settlement 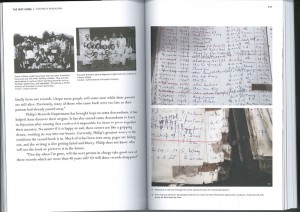 Inside the book: patient photographs and records

Ean Nee Tan and Joshua Wong explain how this experience captured their imaginations: “When we realized how heart-rending it was for the inmates and their children to have been segregated from the rest of society, Joshua and I decided to collaborate again, this time on a book about the life stories of the inmates, recording their emotional needs and their hopes in rebuilding their families.” (11)

They interviewed people who had lived in leprosaria throughout Malaysia: Tampoi, Johor Bahru, Pulau Jerejak, Penang, Singapore, Sungai Buloh, Selangor. Many were searching for members of their families, particularly children who had been taken away or given up for adoption. The authors write about their experience of their interviewees who went through “dark days of rejection and discrimination … their step-by-step journey on the road to recovery, and their pride in living an independent, confident, dignified lives.” (13)

The authors have subsequently shared their discoveries of these personal experiences with the next generation and in the process helped dispel the continuing prejudice against and misunderstanding of the disease. 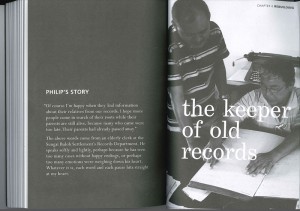 Inside the book: Philip’s Story

The translation costs of the book from Chinese to English were carried by both the Malaysian Leprosy Relief Association (MaLRA) and the Sasakawa Memorial Health Foundation (SMHF). The authors financed the publication of the English version of the book themselves.

Read more about the project on the official website, http://www.thewayhome.my/.