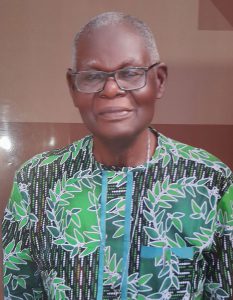 Nigeria’s best-known person affected by leprosy, Ikoli Harcourt Whyte (1905-1977), received his diagnosis in 1914, when lack of treatment was expressed in the Igbo saying: “Onwu bu Ogwu ya (Death is its cure).” He became one of the first resident patients of the Uzuakoli Leprosy Centre when it was jointly opened in 1932 by Britain’s Methodist Missionary Society and Eastern Nigeria’s government authorities. While a resident, Whyte developed into a prolific composer of what anthropologist and historian John Manton has called “songs of worship and wonder.” Searching YouTube for “Harcourt Whyte” will bring up many recordings of his songs along with comments underneath that testify to the power of his lyrics. Fans of the British rock band Coldplay may be familiar with Whyte’s “Otuto Nke Chukwu” from the sample used in “Champion of the World.”

Whyte strongly believed that he had life-changing messages for the world, and to emphasize these messages, he insisted that his songs be performed without any form of accompaniment. He wrote his songs in tonic sol-fa notation, which was developed for teaching singing and sight reading, but is unfamiliar to many musicians today. This notation system — along with lyrics in Igbo, inaccuracies introduced when copies were made by hand, and damage caused by termites and civil war — has blocked Whyte’s messages from reaching their full potential for spreading worldwide.

With the support of the Sasakawa Health Foundation, Whyte’s protégé, A. Kanu Achinivu, has been leading an effort to transcribe his compositions into staff notation and to translate many of the songs’ lyrics into English. The resulting collection of sheet music will soon be published as Messages for Life and Living. In Achinivu’s words, this collection “is regarded by my organization and me as Nigeria’s gift, a wonderful gift, to the world of Music, Christendom and the global community.” 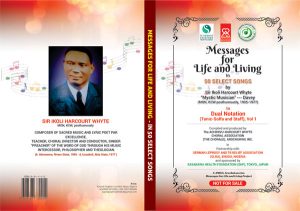 The proposed cover for Messages for Life and Living, a collection of 50 select songs composed by Ikoli Harcourt Whyte, compiled and produced by the Achinivu-Harcourt Whyte Choral Association in partnership with the German Leprosy and TB Relief Association and with the support of the Sasakawa Health Foundation.