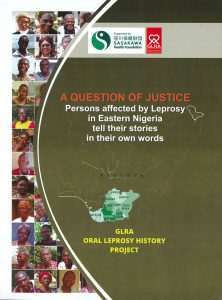 “Arguably, one of the most egregious of deprivations and injustices suffered by persons affected by leprosy over the years has been the lack of opportunity to tell their own stories in their own words.” So states the introduction to a new book that represents a welcome step to correct this omission.

A Question of Justice: Persons affected by Leprosy in Eastern Nigeria tell their own stories in their own words is a compilation of accounts of those who have encountered leprosy—as patients, as relatives of patients and as health workers—in the now defunct Eastern region of Nigeria.

The 188-page book, published by the German Leprosy and TB Relief Association with support from Sasakawa Health Foundation, features the testimonies of 35 men and 17 women whose experiences span a period from 1945 to 2019.

They include Donatus Onwe, who recalled: “I was married before leprosy struck. But immediately I was diagnosed with this disease, she ran away.” Or Mrs. Adiah Christina, who said: “They don’t care to know if I am alive or dead, they don’t even want to know if I am still suffering from the disease.”

There are stories of rejection and betrayal, of lost opportunities and broken marriages—all because of leprosy. But also expressions of gratitude—to God, to health workers—for how life has turned out. As Matthias Onyema writes, “I think leprosy opened more doors for me than if I had not had the disease. I come from a very warped family background and I believe God saved me from a kind of destitution that would have enveloped me if I was without leprosy.”

The book includes a Foreword by Dr. John Manton, associate professor in history at the London School of Hygiene and Tropical Medicine, who trained the team that conducted the interviews. Nigeria, he notes, “has been central in the global history of leprosy,” and research carried out in the country, and the role of Nigerian patients in “seeking and agreeing to treatment, allowing their bodies to be observed, reporting on their experiences with a wide variety compounds, did a huge amount to make modern therapy not only successful, but possible.” Fitting, then, that their stories can now be heard.