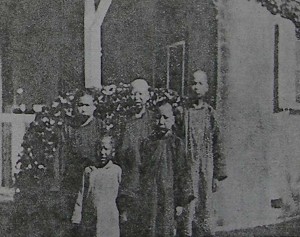 Oi Ki Ling describes this period from 1807 to 1907 as a phase in which missionaries failed to understand the social and political context within which they preached and in which the Chinese found it difficult to reconcile the contradiction inherent in a gospel of love propagated under the protection of a foreign military. (26)

An early account, written in 1895, probably by Henry Fowler, tells of work at Siao Kan Leprosy Home, in Hupeh [now Hubei] Province, in Central China. It is difficult not to see the arrival of the missionaries as intrusive and condescending towards the Chinese inhabitants who have managed their daily lives irrespective of the medical missionary presence or not. Before this particular contingent, there had already been several previous interrupted visitations from other missionaries. The first, Dr Griffith John, established the home in 1895, but after two years he had to return to England. The next, who was limited in his language abilities, did not stay for long and was soon moved further inland. 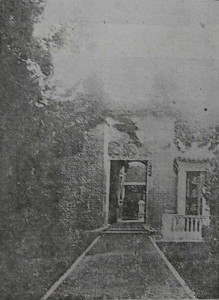 The Entrance to the Asylum (Leper Quarterly)

The account describes twenty-four leprosy-affected people using nine small wards, a dining room, a chapel, a dispensary, and the kitchen. The place was run by a cook known as “Convert Liu” or “Old Daddy Liu”. Firstly, the missionaries were surprised that the people came and went as they pleased. Secondly, their over-riding impression was of a lack of hygiene: “The rooms were dirty in the extreme and under the bed were choice collections of much-treasured rubbish”. *1 Once spring arrived, they did not hesitate to purge the asylum: “Beds and bedding were turned out into the sun, walls were white washed inside and out, and everything washable was washed with disinfectant. But then the Boxer riots began and things reverted to their former state, for when the missionaries were ordered away from both the station and from China, “once more those dear dirty old customs held sway.”

On their return, while they persisted in modernising the asylum and in trying to convert the people, there seems to be more respect for 150 men and boys living in the asylum. The modernising project involved an extensive building program, decking the inmates out in “neat uniforms, dark blue for winter and white for summer”, and changing the wooden bedsteads to iron ones. The new respect is evident in the report of the thoughtful theological questions asked by the catechists and in the reports on reactions to addresses by visiting missionaries. The missionaries are unperturbed by the initial reactions of the inmates, whether they are either unresponsive or politely compliant. The people are allowed complete autonomy. When one visitor asked for a show of hands in response to his message about the new C E Society, he received an unqualified response. This was glossed as “Chinese politeness, but nothing came of it.” Then some time later, one of the leaders in the asylum brought a list of forty names of those who wanted to join. Once again, when the people were told about the Chinese Home Missionary Society outreach to Yunnan, there seemed to be interest, but no response. Yet in time, the people presented the mission with a significant sum of money that they had collected for missionary work for the Yunnan mission.

The Central China Post described the asylum at Siaokan in glowing terms. The overall impression is of a light-filled place: “perhaps if the sunlight had not been so brilliant and the breeze so fresh the Leprosy Hospital at Siaokan would not have appeared one of the bright and happy places of the world”. This exemplifies the enlightening effect of the schooling: “the greatest surprise of our visit was to find that there was a school room in the institution…”; and the development of the hospital, which had started from “a crude and small beginning”, but now “The brightness is the feature that strikes the visitor at the first gateway”.  In keeping with the extended metaphor, Fowler’s work has been to “achieve perfect cleanliness” not only in the surroundings, but also amongst the people who had formerly been beggars, “redeemed from the hideous filth that is a part of the beggar’s profession”. These improvements have extended to the drainage and the water supply and the ventilation and protection from insects. 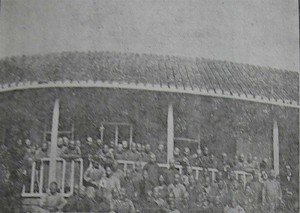 In the newspaper article, Henry Fowler looks forward to the time when the Chinese government takes responsibility for their own leprosy-affected people, rather than executing them, as had recently occurred in Kwangsi. By 1914, Fowler needs money to repair the damage from a terrible storm and a whirlwind. Apparently people with leprosy are still being slaughtered. He tells Bailey that politically things are unsettled and he thinks that the best thing for stability would be for Yuan Skikai to declare himself a “monarch with limited powers, similar to the British Constitution.” He did not believe that China was ready for a republican form of government. He added that while many were expecting revolution, he had “passed through two and do not want another experience.” (Fowler, 1914) Bailey  responded asking for an estimate for the costs of repairs after the storm.  He requests further details about the massacre and agrees that “it would be the best thing for China were ‘yuan’ to declare himself monarch with limited powers.” He hope and prays that there is not a “third upheaval”. (Bailey, 1914)

The Chinese Mission to Lepers was founded in 1927 with a predominately Chinese membership, just at the time that the Christian Church amongst the Chinese population had come of age. (Leper Quarterly, 1927, 1-4). At the same time, the Nanjing incident, in April 1927 (GMD troops killed some foreigners) resulted in a mass exodus of Christian missionaries from the interior of China. (Oi Ki Ling, 38)

The Leper Quarterly reported on the second anniversary of the founding of the Chinese Mission to Lepers that on the morning of the launch of their campaign, March 22, 1927, “the Nationalist forces knocked on the door of Shanghai, and our plan was thus smashed to pieces.” (Leper Quarterly, 1928, p. 1) Rev T C Wu, the General Secretary of the Chinese Mission to Lepers, toured China, visiting leprosy colonies, raising funds, and encouraging regional auxiliaries. (Leper Quarterly, 1927, pp. 13-28). He visited Siao Kan, in Hupeh and reported that

“I was very much gratified to see that the Leper Home was intact despite the intense and prolonged military activities in around Siao Kan since 1926. The buildings were in perfect condition, the garden and the greenhouse full of flowers, and the extensive lawn was being kept most beautifully. There were 110 in the home, all being men and boys. Most of them came from Siao Kan, Wong Pei, and other cities in Hupeh. According to Dr Wong, the weekly injection of esters continued after Dr Fowler left, but very few cases of either complete or apparent cure have been recorded.” (Leper Quarterly 1928-1929, p. 21)

Another prominent figure in medical missionary work in China, James Laidlaw Maxwell, the younger son of James Laidlaw Maxwell senior, became the executive secretary of the China Medical Association in 1923. At this time, Sun Yat Sen, who had received his medical education under James Cantlie, attempted to further the Republican cause. In 1927, Maxwell junior became medical advisor for the Eastern Asia Branch of the Mission to Lepers and also the Far East Secretary of the Mission to Lepers. In 1931, he also attended the Leonard Wood Memorial Conference in Manila that marks the beginning of the International Leprosy Association. Then during the Sino-Japanese war (1937-1945), Maxwell became general secretary of the International Red Cross for Central China.

Although Maxwell returned to Britain in 1940 when World War II was at its most intense, after a major operation that restored his health, he and his wife returned to China in 1949. He was seventy-four by then, just at the time that the People’s Republic of China came into being. Maxwell worked on the agricultural colony at Zangpeh which was associated with the leprosy hospital at Kwang-Chi Leprosy Colony, Hangchow. In 1951, he planned to return to Britain, but died of cerebral malaria the month before he departed. He was described as having “a crystal-clear character utterly devoid of self-seeking, which won him the affection and loyalty of so many Chinese friends in all ranks of society, from those in high military and civil authority down to the poorest outcast who happened to occupy a bed in the public ward.” (British Medical Journal)