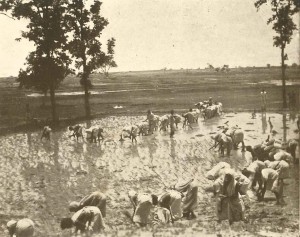 The flows of immigration that took place from the sixteenth century onwards involving trade and the transportation of people inadvertently transmitted leprosy from the New World to the Old World. This includes the voyages of exploration in search of spices or goods for trade, such as the voyages of the Portuguese to Goa, Brazil, Macau, Angola, Mozambique, Madagascar, and Mauritius; the seventeenth century slave trade from Africa to Portugal, to the West Indies, Guiana, and Brazil, and the nineteenth century immigration of indentured labourers such as the Chinese to Hawaii, Malaya, Canada, USA, Australia, West Indies, and Indians to the Pacific islands  – all would have transmitted leprosy.

A great deal of energy went into balancing the costs associated with the creation of leprosaria and determining the sort of character they should have. All of these reckonings arrived at compromises that were dictated by economic imperatives. These reckonings also included a calculation that depended upon the labour of people who were confined in leprosaria. This calculation was bolstered by the moral imperative to put people to work. People in leprosaria the world over were required to build their own shelters and to grow their own food. Leprosaria that were self-sufficient mitigated the drain on the public purse. Leprosy determined how people with the disease could labour.

While the labour of people in leprosaria was a significant component that contributed to the viability of the leprosaria, legislation proscribed the trades and callings that people were permitted to engage in. For example, eggs produced on Peel Island were not for sale on the mainland in colonial Queensland, and vendors in India were banned from distributing food. Most leprosy control laws give a place to this according to the Leprosy: A Survey of Legislation which states that “the legal provisions dealing with this subject are usually purely negative, being either widely drawn and prohibiting lepers from engaging in any trade or calling in which the person employed comes into direct contact with the public, or an exhaustive list of trades prohibited…”  (22) This document provides an appendix which lists the prohibited trades and callings in the legislation that it examines.*1

Leprosy also differentiated on the basis of social standing and ethnicity. Leprosy robbed people of their social and their economic status, but the wealthy were often permitted to stay at home instead of entering an asylum, while those who had no resources had no choice but to surrender their liberty. Immigrant labourers were especially targeted for the presence of the disease. For example, the Chinese and Polynesians and Melanesians underwent regular physical examination for leprosy in the colony of Queensland.

To the surprise of the missionaries, appeals made in the name of leprosy were lucrative. Recording the changes in the history of The Leprosy Mission, Miller uses the entries in the cashbook to determine and describe the nature of the mission from its earliest days. He writes that after the first two years of “unexpectedly large encouragement”, totals for single years were still less than ₤1 000 for ten years after 1874, but ten years later, “The gross income in 1899 was ₤11, 298, so that although the amount seems almost fantastically small in relation to the gross income of ₤614 596 in 1963, nevertheless it revealed a constantly growing supply of funds to meet the constantly growing obligations.” (Miller 70) By the end of the nineteenth century, the Mission was co-operating with twenty-two missionary societies in six countries. (93) When the League of Nations prepared for an international investigation of leprosy, it referred to the Leprosy Mission’s annual budget of ₤75 000 as proof that “no international anti-leprosy organisation can ignore the missions, and the Government of India has raised the question of its official relations to them.”

*1 Leprosy: A Survey of Legislation, Reprint from the International Digest of Health Legislation, WHO: Palais des Nations, Geneva, 1954

League of Nations Health Organisation, Report on the Study Tour of the Secretary of the Leprosy Commission in Europe, South America and the Far East, January 1929-June 1930, Geneva 1930.